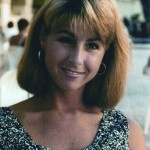 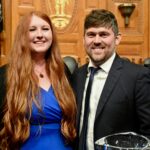 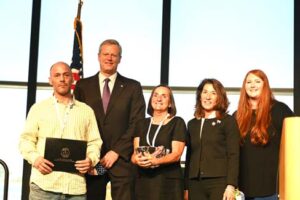 For 14 years, Amy Sweeney was an American Airlines flight attendant. She lived in Acton, Massachusetts with her husband, Michael Sweeney, and their two small children. On September 11, 2001, the day our nation was attacked by terrorists, Amy Sweeney was working on American Airlines Flight 11, the first airplane hijacked by the terrorists to devastate New York City by flying into the Twin Towers of the World Trade Center. Before the plane hit the tower, Amy Sweeney had the courage and bravery to contact the airline’s ground services crew to convey critical information about the five hijackers and their fatal actions on the plane that morning. It is for Amy Sweeney’s heroism, and the heroism and brave spirit of so many of the victims on September 11, 2001, that this award has been created.

Read the story of his heroic rescue of a woman from a car submerged in the Quinsigamond River in Grafton.

On behalf of the Baker-Polito Administration, Anna Sweeney today presented Ross Dugan with the award given annually in her mother’s name, the Madeline Amy Sweeney Award for Civilian Bravery. Read the full story here.

One January 4, 2018, was the first big snow storm/blizzard of 2018 and the visibility was extremely poor and the road conditions were horrible as plows could not keep up with the snow falling on the roadway. Two 72 year olds, Arthur and Peggy Barros, were on their way to Papa Gino’s because Peggy had to work.  When they tried to cross the train tracks, they got stuck in the snow and couldn’t move.

Ryan Saba and Ray Armstead were on their way to breakfast when they pulled up behind the Barros and realized that they were stuck in a large amount of snow on the train tracks and they heard the train coming.  The Barros did not hear the train coming.  So they pulled up next to the Barros vehicle to help the people get out of the car.  Mr. Barros was able to get out of the car and Armstead ran over to Ms. Barros side of the car to get her out.  He tired multiple times and was telling her to unlock the door.  She finally unlocked the door and Armstead got her out.  Saba came over to help and they both assisted her to Saba’s truck.  They also helped Mr. Barros to Saba’s truck as well.  Just after they got the Barros to the Saba’s truck, the train struck the Barros vehicle.  They stayed with the Barros until the police arrive.  Once the police arrive they left.

On January 5th Mr. Ryan Saba and Mr. Ray Armstead came into the police station to report that they were informed, from their friends that the police wanted to talk them. These two men were hero’s.

On August 19, 2016 ten-year-old Jaydon Dancy of Salem was playing on the waterfront area of Palmer Cove Playground when he saw a kayaker in distress.

The kayaker was approximately 30 feet offshore when he overturned and fell from his vessel into the water.

Jaydon and an older female nearby both called out to the man but he did not respond.  Jaydon then entered the water with the woman and he made his way to the main in the water who was now unconscious.  Jaydon was able to grab hold of the man and together with the woman pulled him the entire distance to the shoreline.

Police, Fire and EMS arrived shortly thereafter and despite lifesaving medical intervention the man succumbed to the medical episode which caused him to fall into the water.

Jaydon Dancy was honored in front of his entire school (Carlton Innovation School) in October for his heroic actions by Salem Police and Fire Departments along with local and state leaders.

In March, he was recognized by the American Red Cross in the category of Selfless Acts by Youth Heroes.

Jaydon was so humble about his bravery and his family and community were incredibly proud of him.

Tragically, Jaydon was accidentally killed on June 9, 2017 when he crossed and active commuter rail line to retrieve his bicycle and was struck by a commuter train.

The entire city of Salem mourned his loss but were comforted in some small measure by remembering his heroic act and the role model he was in life to his classmates.

While dining with his wife Rosemary at Bertucci’s restaurant in Taunton on May 10, 2016, a man wielding a knife entered the restaurant and began to stab innocent patrons and employees.  In an act of extraordinary bravery and with complete disregard for his own safety, George Heath grabbed the crazed murderer, shielding a pregnant woman from the knife-wielding, out-of-control man.  Although the woman was stabbed, Mr. Heath saved her and her unborn child from being brutally murdered.

While working as a livery driver, Mr. Gomez’s vehicle was pulled over by several State Police vehicles to execute a felony stop. Unbeknownst to Mr. Gomez, the female and child passengers in his vehicle had been kidnapped by the male passenger. As he stopped the vehicle, he turned to the backseat to see that the suspect was holding a firearm. Without regard for his safety, he lunged over the seat and grabbed the gun. During the struggle, the female victim was able to escape the vehicle safely with the child. The Troopers arriving on the scene were then able to seize the weapon and execute the arrest.

Mr. Desousa saw flames corning out of a home when he was stopped at a Fall River intersection. Mr. DeSousa parked his vehicle and knocked on the window of the burning building, which also houses a restaurant. He notified the owner that the building was on fire and then forced the hall door open to alert the other tenants. Realizing that a resident was in distress, he carried her outside to safety, amid increasing smoke. He then went to a neighboring building and notified those tenants to evacuate.

Mr. Arredondo was standing at the finish line of the Boston Marathon, waiting to hand out American flags in memory of his son, who’d lost his life fighting in Iraq. When the first bomb exploded, Mr. Arredondo was in the bleachers, wearing his signature cowboy hat. He immediately vaulted the barricade and raced straight into the acrid cloud, where he saw a big pool of blood and several severed limbs. Directly in front of him, a young man with no legs was trying to stand up. His was bleeding profusely, apparently beyond help. Arredondo used a sweater offered by a bystander to apply tourniquets to the man’s legs, then grabbed an available wheelchair. Holding up what remained of the man’s legs, Arredondo whisked him toward the medical tent and directly into an ambulance. There is no doubt that Mr. Arredondo heroically saved the man’s life.

Mr. Antonino, of Wakefield, MA, rushed into a burning triple decker in East Boston. Going door to door, floor to floor, he alerted tenants to the fire and directed them to vacate, yelling “let’s go we’ve got to get out.” By his bravery and quick thinking, Mr. Antonio helped 23 adults and seven children escape safety. Firefighters were astounded that everyone got out alive.

Mrs. Guerrero, 39, of West Springfield, died during a historic tornado while shielding her 15 year old daughter in the bath tub as her family’s triple decker collapsed on top of them. It took firefighters more than two hours to reach Angelica; her daughter survived.

The foursome saved the driver of a crashed sport utility vehicle in Uxbridge, MA. Mr. Chenevert heard the accident occur and called 911 before rushing to the scene to help. The Genests and Mr. Bianco were passersby who stopped to assist the driver who was pinned inside the vehicle.

Ms. Conley, a crossing guard dressed in full uniform, was struck by a car as she attempted to help a child cross the street outside Mather Elementary School in Dorchester, MA. Witnesses said that when Ms. Conley saw the car was not slowing down; she clutched the child in her arms to protect him. Ms. Conley died from her injuries eight days after the accident.

Mr. Papapietro escaped unscathed from a wrecked Green Line train at Riverside Station, then heard a trapped woman screaming from inside. Without concern for his own person, Mr. Papapietro rushed back into the mangled car and located the victim. He removed his shirt so he could hold it over her mouth to filter out the acrid smoke, and held her hand until emergency responders could reach them.

Mr. Muthua, 25, worked for Triangle, a nonprofit whose mission is to empower people with disabilities. He was the overnight attendant at a group home in Danversport when a blast rocked the neighborhood just before 3:00 A.M. Confronted with this extraordinary situation, Mr. Muthua rose to the occasion and more. Seeing the living room ceiling collapsing around him, Mr. Muthua fetched his car (parked perilously close to a gas station), parked it in front of the home, then went inside and coaxed the four male residents out of their rooms, carrying one of them out on his back. Never expecting to be hailed as a hero, he bravely honored his commitment to the men in his charge.

These four men bravely saved two lives in Newburyport, MA. After hearing a loud explosion at a neighbor’s home, they emerged from their own homes to find a nearby house on fire. Without hesitation, they entered the smoke-filled home twice despite the risk of a second explosion.

Mr. Kouloheras, 92, and Robert Michalczyk, both of Lowell, MA., observed a man climbing over a bridge railing with the clear intent of jumping into the fast moving waterway below. They left their cars and working together removed the suicidal man from the railing and restrained him on the sidewalk until help arrived.Mr. Paquette, of Auburn, MA, observed a plane crash upon takeoff from Fitchburg Municipal Airport. The plane caught fire with two male occupants trapped in the wreckage. Mr. Paquette stopped his car, ran to the plane, and pulled both critically injured victims from the cockpit to safety as flames consumed the plane.

Four volunteers of the Pilgrim Composite Squadron Civil Air Patrol, a civilian arm of the Air force, responded when a small plane carrying family of seven from Florida to New Hampshire crashed in the vicinity of Beartown State Forest, near New York state line.

Mr. Medeiros, 51, of Fall River, MA, was travelling on Route 24 in Freetown when he spotted a burning car in the breakdown lane. He pulled a young woman from the engulfed car, saving her life.